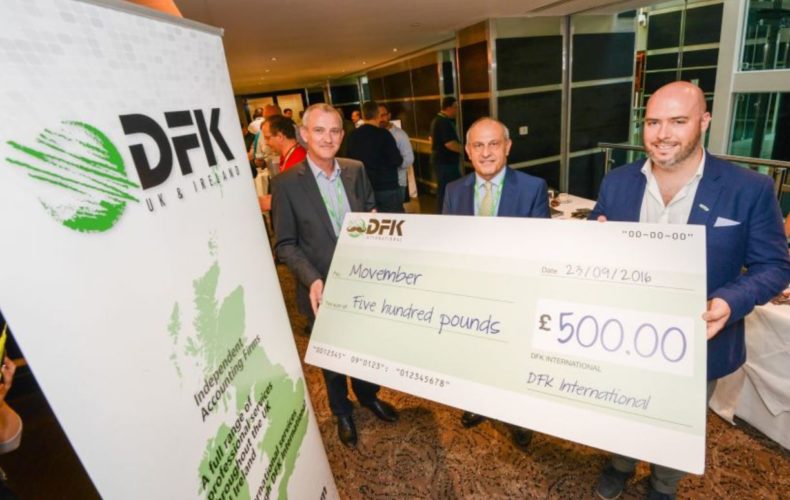 DFK regularly features in the Movember Foundation’s top 50 leader board of multi-national networks and the association, which is made up of more than 220 members with over 400 offices in over 85 countries, is determined to beat the $60,000 raised by Mo growing members last year.

As part of the launch, representatives from the Movember Foundation were invited to DFK UK & Ireland’s Annual Conference held at the Grange Hotel, St Paul’s in London.

Demetris Demetriou, President of DFK International, and Bob Law, Chairman of DFK UK & Ireland, presented the charity with a cheque for £500 to kick-start DFK’s fundraising for 2016.

DFK International members across the globe will be taking part in Movember for the sixth straight year, and so far have raised a total of $360,000 for the Movember Foundation.

The Movember movement has grown tremendously since 2003, inspiring support from over five million Mo Bros and Mo Sistas.

DFK International’s team is once again being co-ordinated by Paul Panabaker, partner at Davis Martindale and vice-president of the Americas region. He said: “DFK firms and members worldwide have shown strong support for promoting men’s health awareness and we’re delighted to launch this year’s campaign.

“We’re once again encouraging all our members to participate, support and share their involvement with Movember with DFK colleagues around the world.”

Bob Law, added: “We’re delighted representatives from the Movember Foundation could join us at our UK & Ireland conference to share news about how funds raised across the world is helping to raise awareness of men’s health issues and support thousands of people all over the world.

“The conference was also a fantastic opportunity to sign up some of the first wave of DFK Mo Bros and Mo Sistas and kick-start the fund-raising with a cheque presentation to the Movember Foundation.”

John Owens, Development Director, the Movember Foundation is delighted DFK has signed up to support the charity again.

“It was great to have the opportunity talk at the DFK UK & Ireland Conference,” he said.

“We are thrilled that DFK Mo Bros and Sistas are joining the fight for men’s health once again this Movember, and we are very grateful to DFK for kicking it off with a generous donation.

“Whether they are Growing a Mo, taking on a Move challenge or hosting an event, they’ll be helping us stop men dying too young by raising vital funds and awareness. Hopefully together we can make it the best year yet.”