CBW is awarded Firm of the Year

A London-based accountancy firm has been named as DFK’s International Firm of the Year 2021 in recognition of its exceptional contribution to the association. 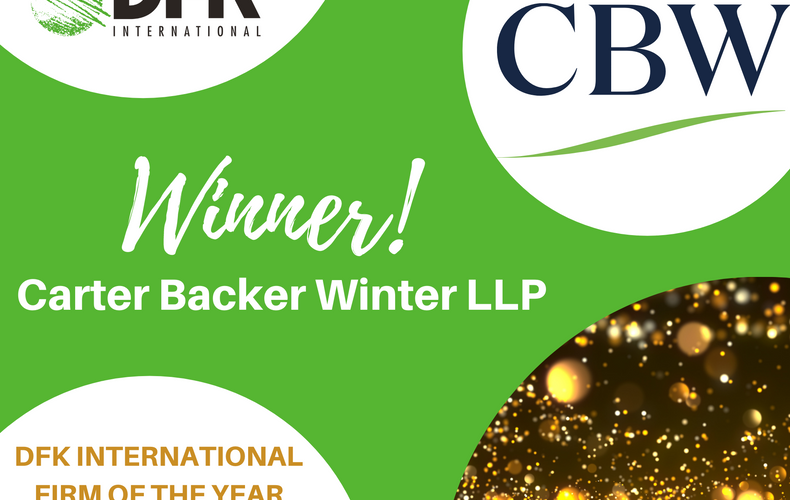 A London-based accountancy firm has been named as DFK’s International Firm of the Year 2021 in recognition of its exceptional contribution to the association.

CBW was honoured with the accolade during DFK International’s virtual annual general meeting which was held online due to the impact of COVID-19.

The firm joined DFK in 2015 and has been actively involved in the association ever since, not only through making referrals, but participating in conferences and events and promoting DFK.

Peter Winter, who has also sat on DFK’s International Board, said: “We are delighted and proud to have been named DFK International Firm of the Year.

“DFK International is a hugely important part of CBW and it allows our clients to have access to firms who offer the same high level of service, delivered by like-minded people, wherever they wish to do business.

“Over the last six years, we have developed extremely strong relationships with many of the DFK International firms.  We share many clients across the world with our DFK colleagues, and those clients all enjoy a professional, hands-on, but crucially, one firm approach from working with DFK International.

“I would like to thank the DFK team and all our DFK colleagues across the world for welcoming us at so many conferences and for such strong levels of communication when it comes to working with clients and contacts, particularly during COVID-19, when we haven’t had the usual face-to-face contact that we all so enjoy.

“Finally, thank you to the CBW team for embracing all the opportunities that DFK International presents, from sitting on international committees and boards, attending conferences and groups, to hosting DFK wine tastings and social events, and raising money for DFK charities.  This award is something that we have all worked hard to achieve together.”

Martin Sharp, executive director of DFK International, said: “We would like to congratulate CBW on being selected for this award. The firm has made an outstanding contribution to the association across a number of areas, so it is truly well-deserved.

“CBW has not only made a number of high-quality referrals, but has been heavily involved in DFK committees and participated in conferences and events.

“To receive DFK’s International Firm of the Year after joining just six years ago demonstrates CBW’s commitment to the association and the fantastic level of impact the firm has made.”