A focus on connection, community and cloud has earned Brisbane’s Paul Fiumara his second term as DFK International vice president for the Asia-Pacific region. 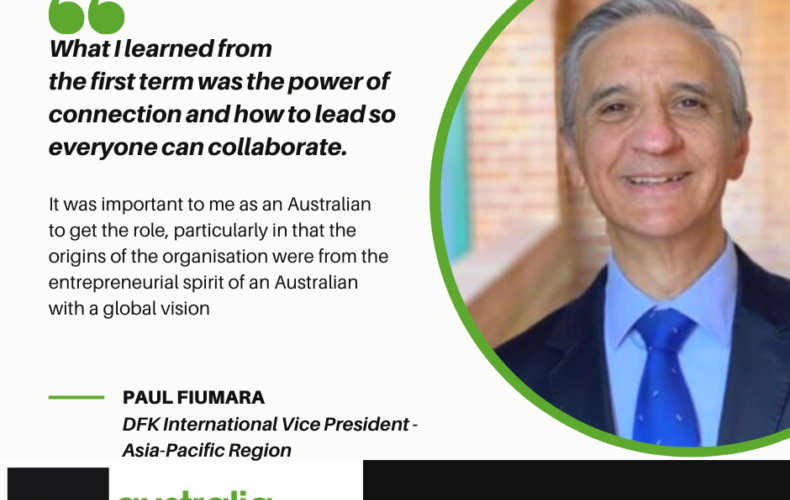 A focus on connection, community and cloud has earned Brisbane’s Paul Fiumara his second term as DFK International vice president for the Asia-Pacific region.

Partner of Brisbane Chartered Accounting firm DFK Hirn Newey and the first Australian VP, Mr Fiumara’s work in his first three-year term has placed the 95 offices in the Asia-Pacific region in an excellent position as they now face the COVID-19 pandemic. That includes 14 firms within national accounting and business advisory association DFK Australia and New Zealand (DFK ANZ).

“What I learned from the first term was the power of connection and how to lead so everyone can collaborate,” he said. “It would have been impossible to have the discussions we've had since the pandemic began without having connected with people beforehand.”

Those global connections were built by traveling to meet Asia-Pacific members to hear their issues, resulting in initiatives like a worldwide Mandarin speaking group for better communication with inward and outward client and referral work. It was the challenge to work with colleagues from different cultures that attracted Mr Fiumara to the DFK international board, that’s now led to his current position.

“I’ve learned no matter what board you're on, whether an accounting board, firm, charity or association, the issues and opportunities are always the same,” he said of having held leadership roles across DFK ANZ, DFK International and his local community. “It interested me how different cultures deal with those issues. And I found most of our international colleagues faced the same challenges as us.”

Community is his other focus, having already grown firm numbers in the Asia-Pacific group and increased Asian participants to the already strong Australian contingent attending international conferences - a testament to his ability to understand cultural differences. He also redeveloped those conferences to include value-add sponsors, introducing its international members to cloud accounting software Xero.

“It was important to me as an Australian to get the role, particularly in that the origins of the organisation were from the entrepreneurial spirit of an Australian with a global vision,” he said, referencing a DFK founding father being an Australian. “The world loves the Australian spirit. They look closely at what’s working in ANZ. The leadership we’ve been able to exert, the strong drive and wanting to advance ourselves has meant having an Australian in the VP role representing the Asia-Pacific region is viewed favourably.”

His focus now is to build connections and collaborations amidst COVID-19, including succession planning at the executive level and member resilience. “It’s about building members’ resilience to address the challenges they'll be facing over the next two or three years,” he said. “The other is to build succession so the next executive member understands the systems, processes and decisions to enable them to continue moving the Asia-Pacific region forward, given things will be so different.”